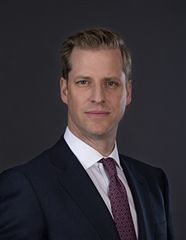 David Irving holds a Bachelor of Arts with an Honors degree from Acadia University. Initially starting with Atlantic Towing as a deckhand onboard an offshore vessel performing anchor handling operations, David advanced his position within J. D. Irving, Limited as a Commercial Representative. With a strong operational background he quickly moved through the corporation dedicating his time and expertise to becoming Coastal Manager then Director of Sales & Marketing. Notable achievements during David’s time at Atlantic Towing included securing a 20 year contract for four newbuild offshore vessels for Exxon Mobil and leading the setup of a new international joint venture for four specialized Tugs at an LNG terminal in Trinidad & Tobago. Since then, David has progressed into a Director role with the Construction & Equipment Division as a Business Strategist, which has now led to a General Manager role overseeing two of the five companies in that same division. David has received training through J. D. Irving’s executive development program with the Richard Ivey School of Business at the University of Western Ontario and has completed an Executive MBA from the same institution.

David is married with three young boys and lives in Rothesay, NB. He was elected a Governor in 2017.
Back