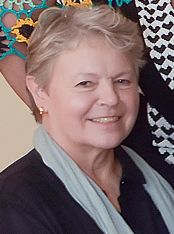 Hilary is a graduate of the Netherwood Class of 1974. She was elected as an RNS Governor in 2018 having served as a school governor also in the past. She lives in Fredericton, NB where she is a crown prosecutor.

Hilary J.A. Drain graduated from The Netherwood School for Girls in 1974.  She obtained her undergraduate degree in History in Canada, and did her LLB in the UK, where she was born.  Hilary is a member of The Honourable Society of Middle Temple,  the Bar of England and Wales and the New Brunswick Bar.  In private practise for two years Hilary has worked as a Crown Prosecutor for the Province of New Brunswick for over 30 years.  In 2005 she received her Queen’s counsel designation and is presently the Regional Director, Fredericton, Burton and Woodstock.  Hilary was on the Board of Directors of Women in Transition House and has served on several committees at her Church, Wilmot United.  Married to Edward J. Bowes they have one son, Duncan Bowes, who has one year remaining of his 5 year residency in anesthesia and still lives in Saskatoon, Saskatchewan.


Hilary was elected as an RNS Governor in 2018.
Back