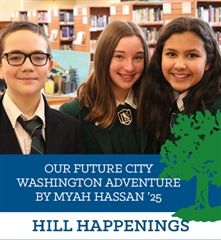 Grade 7 students Oasis Guimond, Myah Hassan, and Ellen Wilbur advanced to the Future City Finals held in Washington, DC in February, 2020. This is the first RNS team to do so. Myah shares the team's experience.
By Myah Hassan '25

In February, our Future City team, Bevetia, got to fly from Saint John all the way to Washington, DC to compete in the Future City Finals. This is a worldwide competition that drew teams from all over the globe. Some teams were unable to compete this year because of coronavirus.

The Future City competition encourages students to find solutions to a problem related to living in a city. This year, the theme centered around access to clean, safe drinking water. As a team, we had to come up with an idea that would allow the citizens in our city to access clean water 100 years in the future. As part of the competition, we had to build a physical model of our city to scale, complete an online city model, write an essay describing our city, as well as the people who live there and the infrastructures in place to help our citizens live their best life.

We really enjoyed the experience of being able to go to such an incredible competition. We got to meet teams from all over the US such as New England and Alabama. We got to meet a lot of other students and learn all about their projects and where they were from, and we got to see what their projects looked like and got a lot of new ideas and experience that we can pass on to future teams.

The level of competition was actually pretty intense, there were a lot of incredible teams taking part. I was super impressed with some of the teams' ideas that they put in their city to help their citizens have clean drinking water. Some teams used desalination, but others used reverse osmosis, and others, like our team, used a series of filters.

Some advice for the Grade 6s next year would be to do a skit for their presentation as opposed to talking to the audience in a typical presentation format. We discovered that a lot of the teams didn’t actually have a formal presentation to showcase their city, but they acted it out with characters and props, which made it fun to watch. One team had a skit with a time-traveller, while another team had a skit where a criminal wanted to sabotage the city, but pretended to be a doctor in order to find the weaknesses of the city, and the team kept bringing up points about their city which made sure that the criminal was not able to harm the city in any way.

It is also important to take advantage of the opportunities given to you, such as when we got to meet with one of our local engineers and get help from her with our moving parts. When we got chosen to go to PEI, we were lucky enough to have Mrs. Wilcox’s father-in-law come in and listen to our presentation and give us pointers. This was very helpful as we were also able to get a better understanding of our own presentation and where people might misinterpret what we were saying.

This was a great experience, and it was amazing to be able to see other teams' presentations. We were able to learn so much and it was also a really fun time as we got to see many monuments in Washington, as well! When we were creating a city, we learned a lot about what it means to have a safe city water-wise, pollution-wise, and to work together as a community. We had to learn to work together as a team and listen to each other's ideas, and it was truly incredible to see how far we got.
Back