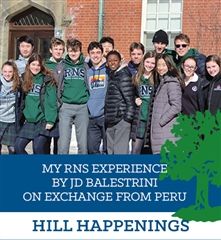 On Exchange from Peru

Peruvian student JD Balestrini chose to spend his summer holidays on exchange at RNS. It was the best experience of his life!
By JD Balestrini

When I arrived at RNS, I wasn’t nervous. I wasn’t scared of what could happen. Going on an exchange had been something I had been looking forward to for years. So, while I would miss my friends and family, and miss out on summer holidays, I was very much looking forward to it. I arrived on a Monday night, and met a few teachers and students, including two of my soon- to-be best friends. Not much else happened that day, as it was late and I had been travelling all day. The real journey started on the next day.

Waking up at 7:00, wearing formal clothing, and going to class were not things I was used to doing during my summer holidays. And over the next few days I started doing a lot of things I was not used to doing, during summer holidays or otherwise. Being in snow for days at a time was a surreal experience; I had rarely even touched it before. I had never been a boarder before, either. Walking back ‘home’ with everyone felt so weird at first. I also had to default to English for most of my interactions, though according to my roommate I did talk Spanish in my sleep. I tried playing hockey despite not knowing how to skate, and started eating foods that differed from the usual. I weathered temperatures of -25oC. So many things were different to everything I was used to, and I think that is the reason I enjoyed my stay so much. My whole exchange was an opportunity to learn about a lifestyle in an entirely different country, and I loved it.

There’s one story that I remember more than any other, and it happened on my second weekend. We were hanging out in Tyler’s room, when he turns around and says, “We should have a sleepover tonight.” I was dumbfounded. So many thoughts raced through my head: “Was it allowed?” “Would the duty teacher allow it?” “Would we fit?” “Who would come?” But the reason why I was so surprised was because I never thought about it at all. Despite it being a situation where it would be extremely easy, I never thought of it. All of my questions were answered later that day. Yes, it was allowed. Yes, Mr. Henry, (or, as I would know him after that night, Leefa), would allow it. No, we wouldn’t fit. But 'Botts' slept on the floor, so we did all fit. Six guys and not nearly enough space. We watched Family Guy until we fell asleep, exhausted. The next morning, we woke up at 9:00 to go to the gym. For some of the others, it may have been just another night. But not for me. From that day on, I felt like I was one of the guys.

My eight weeks went by too fast and it was time to say goodbye. Leaving was terrible. But as Mr. Pineau said to me, "The hardest goodbyes just mean that you had the best memories." Though I’m pretty sure he was just copying off Dr. Seuss', “Don’t cry because it’s over, smile because it happened.”

My exchange has definitely been the best experience of my life. I would definitely encourage all of you to take the chance and go on one. If anyone decides to visit Peru, know you’ll have a place here. But more importantly, if any of you decide to come on exchange to Peru, make sure you select Markham College. That way I’ll get to return the favour and make it the best experience of your life.
Back